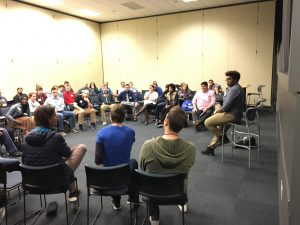 Technology has a problem, and we need to do something about it. To be fair, it’s a problem with society, but it’s worse in tech.

Despite our lip service, we do not celebrate and encourage diversity with our actions. Worse, we actively drive women and people of color out of our communities.

A few weeks ago, Lanice Sims was ignored and disrespected at Minnedemo 25. She did our community a favor by sharing her story so others would know they weren’t alone and so we could all work on being more welcoming.

In addition to the emotional labor of describing her experience on LinkedIn, she brought the conversation to Minnebar 12 (the “Super Bowl of the #MNtech scene”) last weekend with the help of Jenessa White. The two opened an honest dialog on the sad state of diversity of race, ethnicity, and gender in the tech industry; why we should care; and how we improve.

Starting the much needed conversation about diversity and inclusion in technology w/@JNessView and @LaniceSims. pic.twitter.com/ZpWXV7Vca6

They began the conversation by referencing a recent TechStars survey as an example of the gulf between the 81% of founders who say “diversity enhances creativity and innovation” and the 12% who “take specific steps in five areas to create an inclusive environment.” Only 45% work on reducing the conscious bias nearly all (92%) admit exists.

But it’s not just startups. Tech giants with plenty of resources to apply to their “loudly touted” efforts still come up short. Google, Microsoft, Apple, Amazon, and Intel all have fewer than 20% women in leadership roles. In 2016, Black and Latino workers made up less than 10% of the workforce– combined– at the most of big tech companies (despite being about 30% of the overall US workforce). Latina women are only 1%. And despite Black Twitter being a “cultural force”, the pair noted that Twitter has no black engineers in leadership positions (Leslie Miley having left due to the company’s problems addressing diversity and inclusion).

But there’s good reason to fix this. As the pair and audience noted, the bottom line increases with diversity. Companies with diverse management do better. Having women on the board results in better financial performance. Diverse teams are smarter. And papers written with a diverse group of authors get cited more often. And the audience reinforced that conventional wisdom with personal anecdotes. One member reflected that after 30 years in business she was finally able to assemble some diverse teams and then witnessed the best brainstorming sessions she’d ever seen.

But more than dollars and sense, the audience described the toll microaggressions take on their emotional well-being.

"I hate having to do emotional labor in tech work! It's awful! I don't want to have to do that and I shouldn't have to." #minnebar

Two college students highlighted behavior in their STEM classes women in tech will recognize: men taking credit for women’s contributions. It “tears you down”, one said, stressing that she doesn’t want to feel that way in a field she enjoys. And between them, they exposed the paradox of having to couch ideas in a deferential, suggestive tone to avoid ruffling the feathers of male classmates but also of having to adopt masculine language patterns to be taken seriously.

Someone else relayed the story she’d heard on Twitter of Nicole Hallberg, whose male colleague accidentally used her email signature and experienced the challenges, presumptions of incompetence, and outright hostility women routinely face.

Another recalled when they realized it was always women having to take notes at a meeting.

At another MinneBar talk, Erin Warhol described how, after giving a talk with a neophyte male colleague (along for the learning experience), an audience member asked a series of questions of the man, despite the junior speaker’s continual deference to Erin. The event served as an epiphany for that mentee, who finally understood why supporting women’s voices was so important.

Lanice Sims summarized: “I grew up relatively sheltered from discrimination, until I came into tech. When I learned about our history, I was outraged.”

We are driving women out of our industry.

It’s not only the “death by a thousand cuts”. 60% of women in tech report “experiencing unwanted sexual advances”. Recently, Susan Fowler published her reflections on Uber’s sexist and harassing culture. (It’s not surprising that only 15.4% of its tech roles are filled with women.) But as Cate Houston points out, Uber is easy to hate. She reminds us that this is everywhere in tech: “every woman in tech I know has a story”. Even an Uber recruiter says “sexism is systemic in tech”.

Yes, it’s a systemic problem. And intersectionality can make it worse for women of color and trans women. Amélie Lamont, a young black woman formerly at Squarespace, was told “you’re so black, you blend into the chair”. Trans women are asked “have you decided today whether you’re a man or a woman?”.

Our culture isn’t helping, either. Erin Warhol pointed out how speaking up has “tanked her career” at times and how in Minnesota if you complain then it must be you. Just while writing this article, Bill O’Reilly made a racist and sexist comment about Congresswoman Maxine Waters on a Fox News segment (just like Eric Bolling did a few years back, also on Fox News). And let’s not forget the type of rhetoric which has been elevated to the oval office.

It’s vile. It’s pervasive. And it needs to stop.

But companies are not helping. Despite their lofty words, HR departments serve the employer’s interests, not the target of harassment. And much of the money poured into diversity efforts is concentrated on feeding the pipeline, ignoring that the pipeline leads to a “meat grinder”. It seems employers can’t even stop mistreating the women hired as their ambassadors to women.

And local Companies seeking to improve the diversity of their staffs should be funding and showing up to meetings of groups like Women who Code, Women in Technology, and Twin Cities Blacks in Technology, all of whom were at the Minnebar user group booths this weekend, along with 1000 technology professionals with an unusually diverse mix of backgrounds (for a tech conference). What are big Twin Cities companies doing to support diversity in this community if they aren’t involved with these groups and this event?

So how do we fix this?

During their talk, Lanice Sims and and Jenessa White referenced a Huffington Post article they thought might help the group, 5 Ways White Feminists Can Address Our Own Racism. They reminded the audience that if you step on someone’s shoe, you acknowledge it and apologize, even if it was accidental. Similarly, if you’re called out as having said something offensive, even if that wasn’t your intent, recognize how you made the other person feel and apologize. Taking it further, if you feel defensive about having been called out, you are probably instinctively recognizing an uncomfortable truth about yourself. Explore that; don’t fight it. Taking that further, stop looking for ways you aren’t racist and instead look for ways in which you are, because we all are part of a system of oppression.

The audience was encouraged to list some phrases which evidence a defensiveness or denial about themselves or the nature of our society. An easy lesson is to simply stop saying anything like the following.

One audience member suggested simplifying that list to the phrase “I’m not racist” as everyone is subject to the influence of systemic racism.

All of those exhibit the speaker’s lack of perspective. Ignorance of these diversity-related issues inhibits the empathy (not sympathy) required for those with privilege to do the work to dismantle the barriers which protect their status.

Jenessa White, Lanice Sims, the article, the audience, and many others advocate the most important step everyone should take: *listen*. Follow women, people of color, and people with disabilities on Twitter. Find people who aren’t just like you. Hear their stories. Read the articles they reference. Seek out more information– using search engines, not by burdening others with your entry level questions.

Then, help others by sharing what you’ve learned. But don’t appropriate others’ thoughts. Don’t offer your own two cents if there’s already a fortune from others. Use your voice to amplify those with personal experiences.

There are times when your own words are helpful– when you witness discrimination, harassment, or disrespect.

“If you are neutral in situations of injustice, you have chosen the side of the oppressor.” – Desmond Tutu

Jenessa White reminds us that “even if you are a woman, if you are a white woman, you still have power. If you see something, say something.” Erin Warhol goes further saying what someone was doing was horrible is not action; it’s just an opinion. Condemn the action and actor directly; intercede when it’s happening.

"If you're someone with privilege, if you see something, say something. Isn't what they say at the airport?" –@JNessView #minnebar

So get to know people who are different than you. One audience member suggested travel, which works, but that takes resources. Another audience member reminded us that the Internet makes it possible to interact with people you would never meet “in real life”. At least take that first step.

(Thanks to Minnestar for organizing Minnebar, the sponsors for providing resources, the speakers for leading these discussions, and finally to the tech community of Minnesota for being open and willing to talk about these issues.)

Update 2017-03-30: Lanice Sims wrote about her awesome experience at Minnebar and lauded how attendees showed up with intent.