Clark Sell opened That Conference up this year with a video about community, reminding us that they didn’t set out to be event organizers but rather to help bring us together. For them, these three days at a water park are just the spark to ignite year-round engagement with our fellow technologists. That’s what sets this event apart for me– its inspirational and encouraging vibe.

Every keynote highlights the endless possibilities of what we can accomplish together. Years ago, it provided the necessary nudge for me to become a speaker. It afforded an opportunity for me to raise awareness for the issues I care about. And I’ve felt its gentle pressure to finish “that project you’ve been working on”. 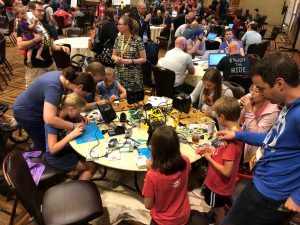 That Conference is also committed to diversity. First and foremost, it’s a family conference. Hundreds of “geeklings” roam the grounds, fueling the imagination of a new generation, filling the halls with energy, and reinforcing the importance of a healthy balance between work and family. Clark routinely encourages young attendees to get involved. Indeed, Katelyn Drew gave her first session as an 11 year old in 2014, having led an Open Space the year before. The conference dedicates roughly a fourth of overall session floor space to these “Open Spaces”, where anyone can talk about any subject, regardless of their expertise or following.

They also have a code of conduct explicitly calling out harassment based on “gender, sexual orientation, disability, physical appearance, body size, race, or religion”. And they have a separate buffet line at every meal for special dietary needs. They’ve removed some ableist language, such as changing their “law of two feet” (encouraging conference participants to leave an environment if they aren’t gaining or providing value) to a “law of mobility”. This year, they added a Women in Technology panel session which wasn’t just a bunch of dudes. And they make special effort to ensure a balance of women speakers during the selection process, first by removing biographic information from abstracts for the community voting process and then by applying a balancing algorithm to the final selection.

We know why this is important. Seeing yourself in those whose success you admire helps you imagine being in their place. It’s critical motivation.

There’s of course more they could do. For example, they could provide ASL interpreters and/or live captioning (especially for the keynote track) to be more welcoming to those with hearing impairment. Also, providing free alcohol excludes some folks and the money could be better spent. But by and large, they really seem to be trying to create a “collaborative, collegial, diverse, and respectful atmosphere”. (That Conference 2018 guidebook, page 4.) From my perspective, they’ve succeeded. I feel completely welcome and at home. I look around and see people just like me. But my perspective is meaningless; I’m a white dude. 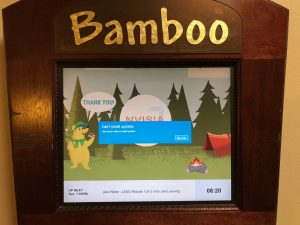 Two years ago Clark announced a goal of half women speakers. The next year, by my crude count of first names, 33% of the standard timeslots involved women speakers (27% if you exclude the Family track). This year (2018), it was also 33% (but only 25% excluding the Family track). We can’t be sure, as Clark has said they specifically do not publish diversity statistics (intimating that it’s partially because they’re not yet proud of the results). So despite significant effort, they’re only achieving an industry average level of representation.

Still, it’s not nearly as bad as some conferences, and one woman speaker spoke favorably of the welcoming environment as compared to another, similar conference. And there’s a bigger problem.

During a feedback session near the end of the conference, a black attendee said that the conference was “shockingly white”. I had given it a passing thought earlier, but I dismissed it as typical of tech conferences. Then again, I’m a white dude.

Based on my quick, visual review of the 164 speakers in 2018, there were 10 who appeared as if they’d identify as a person of color, or about 6%. It would be impossible to understand the composition of the attendees without some sort of survey data, but when I reviewed the admittedly few pictures I’d taken, everybody I saw was white.

Clark admitted it was a problem, but he made it clear they hadn’t taken the concrete, purposeful steps to address it as they’d done to increase the participation of women. And then he made what I have to characterize as a mistake, though it might seem innocent at first. He asked for help– specifically from the individual who’d given him the gift of this observation. Even after they demurred due to their obligations working on this issue with other conferences, he asked again, with a twinge of desperation in his plea.

Diversity is a bit of a chicken and egg problem. The lack of it often makes for a less inclusive environment, which itself harms diversity efforts. But it’s not insurmountable and it’s on the privileged to fix. #MinneDiversity https://t.co/5xj8blVqDI

I understand that the conference is run mostly by volunteers, and it might be natural to expect others to give of their time to improve our overall tech community. And I get that if you offer a criticism, you should be ready to help fix it– “put up or shut up” and all that. But underrepresented and marginalized groups already have to do more work for less recognition. If we are asking for their help, we need to be prepared to pay. This effort deserves focus, attention, and resources.

So what should That Conference do? First, officially recognize and announce this as an initiative. Second, invite underrepresented and marginalized group members into the organizing team, and offer to compensate them. Finally, contract with a professional diversity and inclusion expert such as Ashe Dryden who ran the successful AlterConf events. (Or at least take advantage of her list of tips.)

Of course all of this is going to stretch your already limited resources– time and money. With respect to time, you implemented several new ideas this year– such as TVs for collaboration and a maker space in the Open Spaces area. This diversity initiative might have to be the entirety of your “new ideas” for next year (especially with the changes in store due to the convention center construction completion).

Funding might be more challenging, as you’ve described each year as a struggle to make ends meet. You can start by eliminating early bird discounts and cutting the drink tickets for attendees. You can scale back or eliminate speaker gifts (you had an almost 6:1 ratio of talk submissions to slots). You can collect revenue directly by having diversity scholarship opportunities for sponsors. You can explore sliding scale ticket pricing; corporations can and will pay more for tickets than independents and students. And finally, let attendees simply donate toward this effort.

On the last morning of the conference I cut myself shaving, and it was a bleeder. I just couldn’t get it to clot. So I had to use a bandage, and the front desk only had a big one. Luckily, it was “flesh”-colored. For white skin anyway. Even then, all day long I was conscious of that thing and I was certain I looked ridiculous. It had a real effect, and I knew I could eventually take it off. It wasn’t my very skin which made me feel different.

When I look around That Conference, I feel like “these are my people”. By that I mean fellow techies– at least at a conscious level. But how much of that is the comfort of seeing people who look just like me?

Unfortunately, as a white male I have plenty of places in the world where I feel welcome. We need to change things up so others feel just as welcome as I do.

1 thought on “That Diversity, Continued”