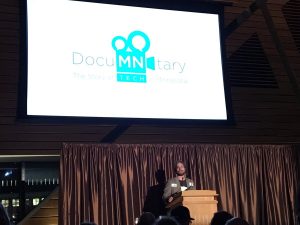 ou know how every web site has a quick, inspirational video with energizing music, quick takes, and talking heads? Scale that up to over an hour where the product is the Minnesota technology community itself and that’s DocuMNtary. It’s an appropriate analogy because filmmaker Nick Roseth said the project was all about “scaling inspiration.”

This sounds like a criticism, but I don’t mean it that way. I actually like watching those videos, as long as they feel real or I’m interested in the subject matter. In this show, despite lofty aphorisms (“I think Minnesota is one of the best kept secrets in the country”) the participants come across as earnest. And who doesn’t like hearing about their own community? Childish though it might have been, every time a shot of the McNamara Alumni Center flashed across the screen, I thought “ooo that’s where we are right now!” It’s hard not to take it at face value when the filmmaker is in your row and the tech luminaries on screen just walked off the stage after their introductions.

The film begins with the elephant in the room– the Cold. We’re reminded that it’s only a few degrees colder than Chicago, that there’s still fun to be had in the cold, and that it’s not cold all the time– we have all four seasons! (I must admit that while a little snow around Christmas is nice, I’m no fan of weeks of cold, grey early winter days with no snow to cover the bare trees, brown grass, and dormant plants. But at least the long winter limits our bugs to a more manageable size.)

The contributors warn us not to strive to be the “silicon prairie”– that we should embrace our own identity. We’re taught how our tech chops were formed in the secrecy of post WW2 military projects and that in the early computing days, IBM and most of the other big players were in Minnesota. Despite the irony, we’re told that our midwestern values prevent us from talking about how those same values also make us loyal and productive. Indeed, this humility underscores the need for the film– to tell the stories we’re too polite to tell.

This ethos, they suggest, was probably formed from our agrarian roots and extreme climate. We’ve been forced to collaborate for generations, and that brings a competitive advantage in our new connected world. Ultimately it’s our people, everyone seems to agree, which make the technology community in Minnesota such a success.

During Nick’s introduction, he encouraged us to participate, celebrate, and advocate. DocuMNtary lived up to those words– and more importantly it’s infectious. From the boisterous ovation and discussion afterward, it was clear the audience was charged with its energy.

After the showing, I had the opportunity to chat with Mike Willbanks (who founded our local PHP user group MNPHP), Jonathan Sundqvist (who now runs that group and an annual, nationally recognized PHP conference MidwestPHP), and Marc Grabanski (who is active in the JavaScript MN user group and founded Frontend Masters, which brings in expert front end developers from across the country for on site and web-based training sessions). As I’m on the board of PASSMN, a Microsoft SQL Server user group, the lot of us are not just participating in our local tech community, we’re actively helping to build it.

And as if on cue, the power of community was displayed right in front of us as Dustin Passofaro entered the conversation. He’s the CTO at Genovest which makes investment tools for individual value traders. Jonathan just happens to work for Interactive Data Corporation (purchased by Intercontinental Exchange, which owns the New York Stock Exchange), and it turns out they supply some financial data Genovest might want to buy. These random encounters showcase the value of in-person community events.

So thank you to everyone who is participating, celebrating, and advocating. And thank you to the creators of DocuMNtary for reminding us of how important that is and how successful we are.