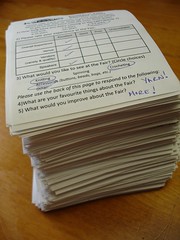 “Surveys to compile” by The Bees @ Flickr.com

Earlier this year Stuart Ainsworth wrote about some controversy over speaker selection for the PASS Summit. He lamented the “lack of a repeatable objective tool for speaker evaluations”. His solution was SpeakerRate.com.

I have also been dismayed by the paper slips used by the SQL community. As technology and data professionals, we really ought to have a database of speaker evaluations.

Stuart recognizes that SpeakerRate.com might not be the best choice but says he hasn’t found an alternative.

Commenter Rob Volk offers up Lanyrd.com (acquired by Eventbrite in 2013) as an alternative. Eventbrite is currently used by our local PASS chapter (PASSMN). However, Lanyrd does not support speaker rating. They’ve said on Twitter they don’t like its chilling effect on new speakers.

I suggest joind.in as a superior alternative.

Joind.in is actively used by the PHP community and is open source. They support short URLs, a QR code generator, a star rating system, and room for comments. They allow anonymous and authenticated ratings. They also have an API. Their site is reasonably mobile friendly and they are actively working on improvements.

They have a manual approval system for new events, but they approved a SQL Saturday after a Thursday submission. I recently set up my talk and suggested using it during my presentation. There were no takers, but I did get paper evals.

Because joind.in is open source and has an API, at any point the SQL Server community could download the evaluation data, fork the code, and move things in a different direction. That wouldn’t be possible using SpeakerRate.com.

I think joind.in is the best choice, but SpeakerRate.com would still be superior to the current manual methods. Let’s just move forward with online speaker reviews.