MinneWebCon is an asset to our tech community and I had the pleasure of attending for a third time this past Monday.

This was the 10th year of MinneWebCon, an annual two-day event for web professionals at the University of Minnesota. (That’s an eternity in the tech world). For the past few years, it’s been held at the beautiful McNamara Alumni Center. Usually, the first day is a three-track conference with two keynotes and the second day is a collection of half-day workshops. The workshops and conference can be purchased separately; I’ve not been to any of the workshops. 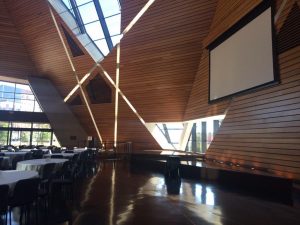 Many technical conferences focus on a particular language or technology, but I appreciate the breadth of topics covered by more general conferences such as MinneWebCon and That Conference. MinneWebCon does particularly well at attracting folks from a variety of disciplines– marketing, content management, design, and coding. As a tool to break down silos at an organization, I would encourage sending people from different departments to MinneWebCon together, with a requirement to attend sessions outside of their official responsibilities. There’s nothing like hearing about the challenges others face to engender empathy, which is key to team cohesion. 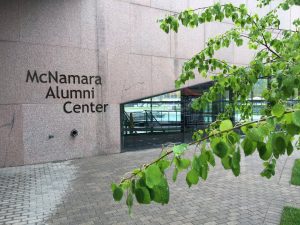 I also appreciate this conference’s efforts at inclusion. They take care to ensure folks with various dietary requirements are able to construct a satisfying meal for themselves from their buffet, rather than waiting around for a special plate. I saw accommodations for those with different abilities, such as a conference buddy to help get food and escort to the breakout sessions. They curate the submitted talks to craft a schedule with something for a variety of roles at each time slot, often including professional development topics. I especially appreciated their selection of “Salary Negotiation for Women in Tech” by Ashley Quinto Powell.

But their most impactful accomplishment is in speaker selection. People feel more welcome in a community when its leaders look like them, which is why it’s so important for us to encourage speakers from underrepresented groups to help address tech’s diversity problem. MinneWebCon routinely succeeds in attracting women and people of color to the podium (both keynotes and the majority of breakout sessions this and some previous years). Other conferences: take note and step up.

There are other little touches which set MinneWebCon apart. Every attendee is handed their code of conduct as part of a personalized, printed booklet which also serves as your name badge. They support the arts by commissioning a local artist (Adam Turman the past several years) to produce a themed poster for each year’s event. You aren’t inundated with sponsor ads and tables. And who can argue with a collection of afternoon snacks and treats?

But I’m most pleased with some of their choices for keynotes. Keynotes are my favorite talks. Technical topics aren’t a good fit for an instructor droning on in front of a silent crowd. Learning happens best in an interactive, hands-on format. I like talks which cover concepts generally and inspire you to learn more. The best talks enlighten and energize. Keynotes– having to appeal to a large, broad audience– are forced into their best selves.

The icing on the keynote cake is when they serve a higher purpose. It’s one thing to motivate an audience to adopt a technology or process, but it’s quite another to open their eyes to injustice. This year especially, MinneWebCon helped bring awareness to the pain, humiliation, and even death communities of color face due to the ills of our society and how they are amplified by our technology.

Safiya Noble exposed us to the many pitfalls of the Google search algorithm in her keynote, such as showing images of black women with natural hair when searching for “unprofessional hairstyles” and providing links to pornography in response to “black girls”. She highlighted the differences when searching for “three black teenagers” and “three white teenagers”– the former resulting in mug shots and the latter with stock sports photos. She cautioned against accepting the common narratives that these are mere algorithmic anomalies. The system isn’t designed like a library to showcase accurate, unbiased information. It’s purposefully a popularity contest and advertising vehicle. And bad information can be made quite popular. Dylan Roof’s searches for “black on white crime” flooded him with the white supremacist garbage which fueled his radicalization. Technology can magnify the fringe and give it disproportionate power to pervert minds.

Black people are 3 times more likely than whites to be killed by police. And they are more likely to be unarmed. @samswey #MinneWebCon

Radicals aren’t the only ones who take black lives, though. Sometimes cops do, too, even when they shouldn’t. Samuel Sinyangwe used his keynote to bring highlight the significantly higher likelihood of being killed by police as an unarmed black man than any other group. Tragically, just the previous day a 15 year old black boy named Jordan Edwards was shot in the face with a rifle by a now-fired police officer. Here, though, technology is part of the solution. Citizen, crowd-sourced data collection, body cameras, and social media are helping to raise awareness of the problem, and data analysis is revealing the steps departments can take to reduce the nearly 1000 shootings per year, especially having more restrictive use of force policies which include de-escalation training.

These are not light topics, but discussing them is critical to limit the harm technology and our society can cause historically oppressed groups, and I applaud MinneWebCon for bringing these speakers to share their stories.

Thank you @MinneWebCon for using your platform to bring visibility to work of @samswey and #BlackLivesMatter. #minnewebcon

When I mentioned the efforts this conference takes at being welcoming, encouraging speakers from marginalized groups, and addressing social justice topics, I wasn’t just presuming. I learned some specifics when talking with volunteer committee members Danny Sussman, Jess Horwitz, and Matt Edwards (and past member Eryn O’Neil) at the post-conference reception. I was dismayed to learn that there were some danger of the conference not continuing, but I was thankful Antoinette Smith stepped up to direct next year.

If there’s one area I think the MinneWebCon could improve, it’s encouraging networking and interaction. It’s a tall order for a Minnesota crowd, but the conference schedule actively curtails it. The 10 minutes between sessions is barely enough time to move from one room to another, let alone strike up a conversation which would inevitably be cut short. I think they would do best to somehow compress lunch and provide an extended break when they introduce the snacks in the afternoon. This would give attendees an excuse to mingle around the food and chat.

Make no mistake, though. This is an excellent conference and well worth your time. Some of the MinneWebCon crew have been at this for 10 years. I’m glad things have worked out so well so far, and I’m pleased to hear that it will continue for years to come. I thank the sponsors and volunteers for putting on this event and hope to return next year.