Let’s say you make a reminder in iOS7 and set an alarm for some future time. 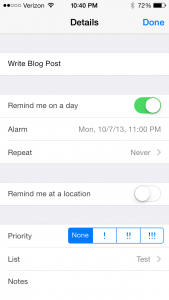 You get a nice, normal reminder: 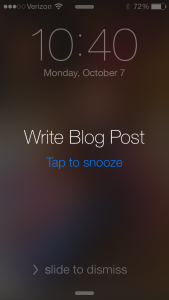 Nah, maybe later. But now it scolds you with menacing cyan text: 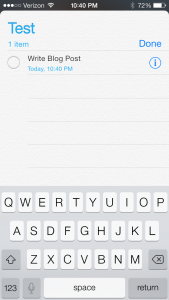 You can’t handle all that pressure and decide to write it tomorrow. Edit the reminder: 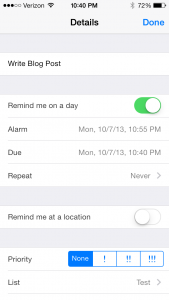 Wait, what’s that now? When did you set a due date?

Well, you didn’t. The Reminders app did. It decided that although you might have wanted to be reminded a bit later, you still wanted to know the original due date, just so you felt really guilty.

But you’re the boss. These machines do your bidding. You’ll just go into that due date and remove it: 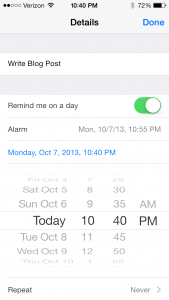 What’s that you say? You can’t figure out how to remove it? No, it’s not that “Never” underneath the dials. That’s tempting. After all, you’d rather this task were never due, right? But alas, that’s when it’s set to repeat. Scribnasium ad nauseam?

If you have an OS X device, you can just remove the checkbox. 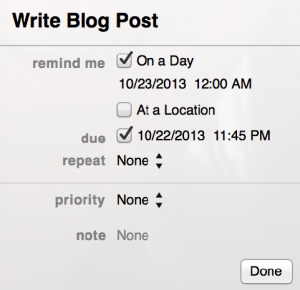 But what if you don’t, or you don’t want to? It took me a bit to figure this out, but all you have to do is turn the “Remind me on a day” off and back on: 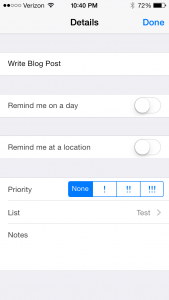 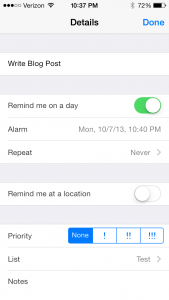 Voilà. Due date gone. If only real life were so easy.